What is Treaties Recognition Week?

First Nations were the original occupants of the land now known as Ontario.  Treaties, which are legally binding agreements that set out the rights, responsibilities, and relationships of First Nations and the federal and provincial governments, were signed with the intent of delivering mutual benefits.   Despite this promise, Indigenous peoples became the target of colonial policies designed to exploit, assimilate, and eradicate them.

Today, the Ontario Government recognizes the wrongs of previous generations and is looking to change the future by building relationships based on trust and respect.  In  2016, Ontario marked its first Treaties Recognition W 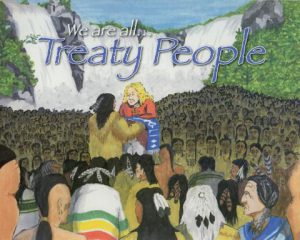 eek from November 6th to November 12th.  It was introduced to honour the importance of treaties and to help Ontarians learn more about treaty rights and treaty relationships.

What occurs during Treaties Recognition Week?

During Treaties Recognition Week, students, and the broader Ontario public promote awareness with special events, social media campaigns, and special learning activities in school.  In schools, students learn why treaties matter to not just our Indigenous peoples, but to all Ontarians from various Indigenous speakers and planned learning activities including classroom tools, resources, and copies of actual treaties.

Although they were signed more than a century ago, treaty commitments are just as valid today as they were then.  Every Ontarian is a treaty person.

Find out more information and resources at: https://www.ontario.ca/pages/treaties