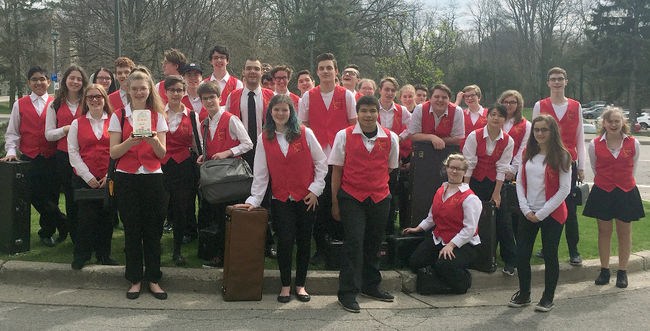 The Chippewa Intermediate Secondary School Band recently travelled to perform at the Atlantic Music Festival in London, Ont. The festival was hosted at Western University.

In addition to performing and receiving a silver rating, the band participated in instrument-specific workshops taught by renowned musicians.

“We are excited that our music students had the chance to participate in an amazing experience, and are proud of the hard work the band has put in practising for this festival,” says band director Marla Sunstrum. “This trip wasn’t just about performing, but about experiencing live music at different levels of playing from high school performers, undergraduate music students, and professional musicians.”

The band also was given the opportunity to experience a jazz performance at Humber College. The show was put on by the college’s band, The Yellowjacket Project, which consists of a recent Chippewa graduate, John Kervin, on piano. They were joined by their band leader Shirantha Beddage, a professor at Humber and a Chippewa alumnist (1997).

“It was great to see all the kids and be reminded of where I was only a few years ago,” Kervin says. “It seems like Chippewa and Humber have an undeniable connection… I hope some of the students realize that and join us at the incredible Humber music program! I loved playing for the students.”

Chippewa’s junior and senior bands have had a successful year, in which they competed in multiple events such as the Northern Ontario Music festival. Due to their hard work, they were offered a spot to perform at Music Fest Canada, which Chippewa has been invited to for more than 20 years.

Both bands continued to show their dedication to music at the local Kiwanis Music Festival, where they both received a gold rating. On top of that, the senior group scored the highest ranking in the secondary band category.

There is more to being in band than doing well in festivals.

According to student, Sarah Andreyechen, “band isn’t just about performing and participating in festivals, but it is also about creating a family and knowing that they are always there to support you. Mrs. Sunstrum, our secondary music teacher, and Mr. Landoni, our intermediate music teacher, have been a huge inspiration to all of us.”

The junior and senior band, consisting of more than 60 students, will conclude the year with their spring concert on May 30 at 7 pm in the Chippewa Theatre.